Our protesters were hotter than yours

First, thank you Judy Frankel. It was a few hours before the PV Estates Traffic Safety Committee, and we were all hard at work (okay, screwing off on Facebag), trying to figure out our approach for the meeting.

The committee agenda had three recommendations for the city council:

We all agreed that #1 was good and #2 was real good. But we thought #3 stank. So Judy Frankel advised us that we needed to come loaded for BMUFL: Bikes May Use Full Lane.

Before the meeting we had to choose between putting together an organized and well thought out approach or go pound our bikes for a few laps around the Wanky Super Power Loop. By the time we’d done three loops everyone was exhausted and had no energy to do anything except listen dully to our Feared Leader, Michael Claw of the Bear.

“Listen up, fuckers,” he said. “I’m going to make this so simple even a cyclist can understand it. The committee doesn’t decide anything, but it can kill everything. These guys make recommendations for the city council to act on. Piss them off at your peril.”

“What are we supposed to say?” asked one cowering, lycra clad sweatlump.

Claw of the Bear handed out Post-it notes. “I’ve dumbed it down for a First Grader, then dumbed it down again for us,” he said. “There are three points:

The meeting was called to order, the pledge was read, and a few traitors were hung by the neck until dead, after which their bodies were thrown to a pack of wild dogs outside the window.

“Okay, you bastards,” said the committee chair. “Who’s next?”

We all cowered in our seats and pretended that we had simply come to take notes. “Let me tell you sonsofbitches how this meeting is gonna go,” said the committee chair. “First one of you underwear-clad clowns leaves a sweat stain on our expensive city council church pews is gonna hang by the neck until dead. Any questions?”

We had none and the meeting came to order. First off was The Great Parking On PVDW Controversy. Concerned citizens stood up and discussed the incredible importance of this pressing issue while the committee tried to stay awake and the police chief idly spun the cylinder of his .357 to see who was going to get shot first for going over the 3-minute speaking time limit.

After a half hour of avid discussion about the life-or-death parking issue, we moved on to the bike signage item on the agenda. “Okay, you bastards,” said the committee chair. “I know what you all want and let’s get this straight: You ain’t gonna get it. So you might as well shut up and go home now. Plus you all stink to high heaven. Take a bath next time, willya?”

Claw of the Bear was not to be intimidated. “We like #1 and #2, but #3 is dumb. D-U-M-B. The last time I saw something that dumb I was in Texas. So we propose something smart. Put up BMUFL signs.”

“What did you call me?” the committee chair bellowed.

“I didn’t call you anything,” said Claw of the Bear.

“He said it again!” roared the committee chair. Then he turned to the police chief. “Shoot the bastard, willya? He just called me a BMUFL.”

“He smells too bad for the wild dogs to eat, so we’d have to bury him out of city funds.”

The chair nodded, grudgingly. “Well, what do the rest of you bastards want?” he said.

One by one we went to the lectern and read our Post-it notes. “Please be nice to us,” we begged. “And give us some BMUFL.”

As each sweaty speaker beseeched the august council, one thing became clear: Our protesters were waaaaay hotter than the parking controversy protesters. The parking lot people were schlumpy, pot-bellied, sag-bottomed, and draped with ill-cut rags that were displeasing to the eye.

Regardless of how dumb we all sounded, it’s hard to argue with smokin’ hot, articulate women in Spandex and tight jeans, especially when, with one flex of the muscled thigh, they could probably crack your skull like a rotten cantaloupe.

Finally one of the committee members, teetering on the edge of a prodigious sleep, made a motion that the committee vote on the recommendations. Only thing was, he changed #3 from “Put up a Dumb Ass Share the Road Sign” to “Put up BMUFL signs.”

We cheered. We clapped. We hollered. We hoped we weren’t going to get shot for leaving chain grease stains on the carpet. The BMUFL recommendation was off to the city council, where it would likely be shot down in flames by angry residents who weren’t about to put up profane words like BMUFL in their fine community.

For today, though, a big old democracy had been done, and not just in the men’s room. 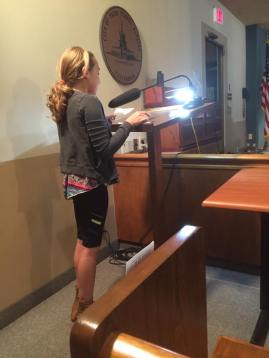 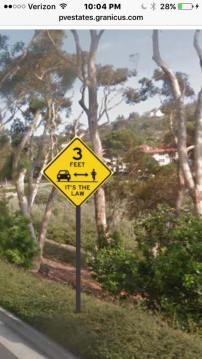 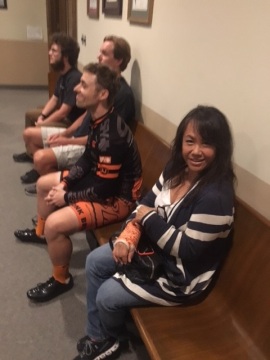 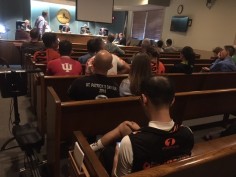 For $2.99 per month you can subscribe to this blog and help us change the world. One BMUFL at a time. Click here and select the “subscribe” link in the upper right-hand corner. Thank you!

§ 22 Responses to Our protesters were hotter than yours

You are currently reading Our protesters were hotter than yours at Cycling in the South Bay.