Before the race we all pinned on each others’ numbers, which looked like this: 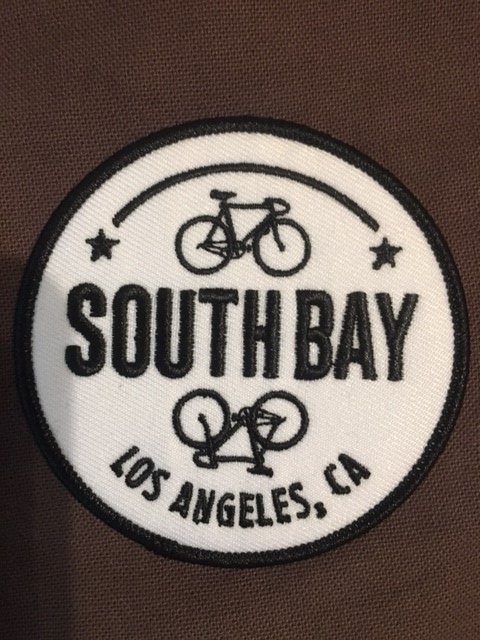 The ref blew the whistle but before we could get going they had to neutralize the race. A gaggle of ancient retirees, all of whom had lived in Palos Verdes Estates since 1978 and were still wearing the same shoes, did a parade lap around the course.

Each angry resident did a mini-ragesprunt, where they harangued about parking. Elbows were thrown, headbutts lodged into ribcages, and one old codger whipped out GoPro footage of *CARS RUNNING STOP SIGNS* and *GASPY GASP GASP* a white vehicle that REGULARLY PARKS TOO CLOSE TO THE STOP SIGN NEAR THE INTERSECTION ON THE STREET THAT GETS 183 WHOLE CARS A DAY.

The whistle blew and the race was on. Dashing into the first corner was Jay “BMUFL” Yoshizumi, who attacked hard up the gutter, battering into the wind while pointing out that safety was paramount. He swung over just in time for G3 “Data Boy” Seyranian, who unleashed a flurry of softening-up punches over the short cobbled section, stringing out the peloton, making the watt meters crackle, and pointing out to statistical data points that validated the BMUFL signage.

One of the riders on Team Lunada Bay Boys on Mom’s Couch, Doper McWanksalot, got caught up against the curb, threw a chain, and dropped his fake petition with 83 bogus signatures just as Michael “Call Me Claw” Barraclough came up hot and inside to set a course record for the first lap. Claw also let the refs know that if the Allstars didn’t sweep the podium with BMUFL signage, they would continue to show up to every subsequent race and stack the field until justice was done.

Shrimpy McShrinksabunch, team leader and designated sprunter for Team Lunada Bay Boys on Mom’s Couch, roared briefly to the front and sputtered on about delaying BMUFL signage until the year 2082, when all of the ramifications and data and GPS coordinates could be algorithmized, logarithmized, digitized, and mesmerized, but was quickly chopped hard by Kristie “All Aces” Fox, who blew him up against the barriers with a hard-charging citation to traffic counts related to Terranea and The Donald Drumpf Golf Club.

Now the Allstars were warmed up and a series of brutal attacks began, headed up by Pete “Older Than Dirt” Richardson and followed by Jon “Same Shit Sounds Smarter In British English” Phillips, who hit it hard at the bottom of the small cobbled climb that had been slickened by the snot, spittle, and Internet ugliness dribbled out by the NextDoor Wankers On The Bay Boys’ Moms’ Couches.

One Lunada Bay Boy on Mom’s Couch slid out in the turn and caught his monosyllables on his poor syntax, making a fool out of himself and going hard into the hay bales, where he was forced to pay rent and get a job sacking groceries at Von’s.

Suddenly the weather turned nasty and a foul gale blew in. Our heroes, who had been driving it at the front with relentless accelerations by Victor “Don’t Fuck With Me” Cooper, Delia “These Are The Facts And They Will Hurt You” Park, Doug “The Motor” Toland, and a vicious move that split the field by Tom “One-Handed” Duong, the peloton began to crumble.

A breakaway formed with Claw, Park, Fox, G3, “Gizzards” Jim Hannon, and “Bronx Bomber” Julian Katz, as the Allstars back in the field sat up to block the weak, ineffectual, incoherent, and disorganized attempts to bridge by Team Lunada Bay Boys on Mom’s Couch Who Mostly Complain on the Internet but Don’t Have the Balls to Show Up.

Just when it looked like the break would go clear, Norm “Video Production” Zarifsky of Team LBBOMCWMCOTIBDHTBTSU made a daring move out of the field and, stuck in no man’s land, seemed set to bridge. However, he began to huff and puff as he spouted anger at cyclists, reviled bikers who ran stop signs, and declared that all PVE stop signs should be removed, buried, and shot as his FTP of 12.2 watts was immediately exceeded now that he was out in the wind and unable to suck anonymous Internet wheel.

Moreover, he had failed to notice that Dave “Video Allthetime” Brinton had latched onto his wheel, and as Norm began flicking his elbow, drooling in desperation, and begging everyone to condemn that terrible pro bono lawyer blogger dude who is in cahoots with the cops and judges to get bikers out of citations, Brinton came around, dropped Norm like a big turd from a tall horse, and bridged to the break.

The traffic safety committee voted 4-0 in favor of the Allstars when, post-race, a challenge was made due to alleged irregular sprinting by Wike, but the commissars concluded that not only had Wike won the field sprint clean, but that the complaining wankers who lodged the protest would, as punishment, be grounded until next Thursday and limited to $150 in gas charges on mom’s credit card for the rest of September.

After the race, the Allstars modeled their sexy BMUFL signage and prepared for the final race of the season. The next race in the series is the finale, the PVE City Council BMUFL Grand Prix. Be there!

For $2.99 per month you can subscribe to this blog. Hope you can make the next race. We’ve even got a “Butts in Council Chambers” Strava segment. Click here and select the “subscribe” link in the upper right-hand corner. Thank you!

You are currently reading The PVE Traffic Safety Committee Grand Prix at Cycling in the South Bay.