The year was 1967. At a hastily chosen venue picked just three weeks before the game, the AFL-NFL World Championship Game became what was retroactively dubbed “Super Bowl I,” the greatest ridiculous event in the history of sports. With a name borrowed from the wildly popular Wham-O kids’ toy, the “Super Ball,” the Super Bowl’s journey to become America’s lasting contribution to obesity, alcoholism, and TV ad saturation came about in the most inauspicious of ways.

Unable to sell out the Los Angeles Coliseum, a mere 60,000 of the 90,000 seats were filled. Fifteen million televisions in LA County were blacked out due to broadcasting rules. Coaches wore blazers and short sleeve dress shirts. Thousands of spectators wore ties. A couple of nutballz whizzed around the stadium in hydrogen-peroxide jetpacks powered by Bell Labs, the next generation of personal transportation that wasn’t.

Globally famous entertainment was had by the marching bands from the University of Arizona and Grambling State University along with the release of 300 pigeons, one of whom crapped on Frank Gifford’s microphone. Parts of the massive electronic scoreboard came detached and plunged into the empty stands, avoiding what would have been certain death had anyone been there.

Yet for all its failures, this fitfully started work-in-progress became the behemoth it is today, a watchword for diabetics, couch potatoes, and gambling addicts the world over. In that first game, millions of viewers watched the heroics of legends like Starr, Gregg, and McGee as they launched that modest first Super Bowl into the airwaves, a perfectly thrown touchdown pass destined for the end zone of fame and eternal glory. From humble beginnings came greatness.

Much like that first Super Bowl, pitting archenemy NFL against the upstart AFL, this past Sunday marked the beginning of a sporting event so astounding that, despite its modest participation and relatively empty stands, promised to change forever the history of sport.

I’m speaking, of course, of the new date and time for the epic Telo training crit in Torrance. Historically held on Tuesday from 6:00 to 7:00 PM from mid-March through September, this past weekend saw the first ever Telo Sunday, run from noon to one. With technical and food support provided by ShiftMobile, a host of eager competitors showed up to contest this legendary race at a new date and time.

A hard fought battle with repeated attacks saw a breakaway with Marco “The Origin” Cubillos, Surfer Dan Cobley, Kevin “Roundhouse” Nix, and Brooks “Lotta” Hartt. After a series of attacks and counter-gasps, it was me, Surfer Dan, and Lotta. Coming into the final turn I surprised Surfer and Lotta with my hidden internal bicycle motor and was able to cross the line for my first ever Telo win, something that the history books will judge as vastly more important than anything that ever happened in Super Bowl I with the likes of Lombardi and Starr.

Unlike those heroes of Super Bowl I, who earned a measly $12,500 per person (and an even measlier $7,500 for each losing Kansas City Chief), male and female winners of Telo received a freshly baked loaf of the incomparable Mrs. WM’s home-baked bread. Marilyne Deckman donated her loaf to the hungry pack of wolves, who tore it apart and devoured it on the spot.

Telo is going off next Sunday as well. Do you want to be part of history, and perhaps even be the breadwinner? Be there! 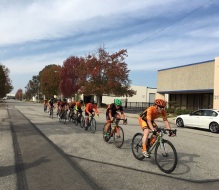 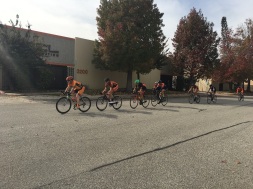 Nix on the front again! 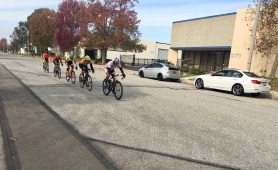 Geoff Loui on the attack!

Pinching off from the group 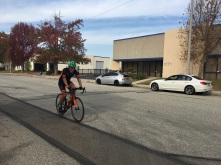 Gary and Connie having a good time!

Will this never end?

Shift Mobile to the rescue!

Seth first, but Dan gets the bread!

Reese Sylvester rides down from Trancas

Brooks Hartt stringing it out 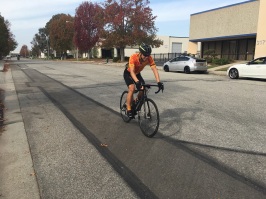 For $2.99 per month you can subscribe to this blog and pay to support what you might otherwise take for free. Click here and select the “subscribe” link in the upper right-hand corner. Thank you!

You are currently reading Super Bowl I at Cycling in the South Bay.