BWR technical tips: The devil’s in the dirty details

I know it’s too late. “The hay is in the barn,” as G$ likes to say. However, you’re still signed up for the BWR, so rather than exhort you to train more, which won’t help, I’ve solicited some advice about the technical aspects of actually riding it.

As a matter of accuracy, the wider the tire, the better for the dirt sections. You can go faster in the dirt with 32mm tires than with 28mm or 25mm, as the skinnier tires don’t float like the wider ones and tend to dig down into the dirt, especially on very loose sand. The problem is that when you get to the road on the wider tires, the rolling resistance becomes an issue… for nearly 100 miles.

In other words, pick your poison. Is it a road ride that you need to be able to ride dirt on? Or is it a dirt ride connected by brief segments of pavement?

After two recon rides thus far for 2018, with many different kinds of riders and bikes, a few patterns have emerged which follow a hallowed trend. The rides start out quickly and everyone seems overly eager to hit it hard, which inevitably comes back to haunt them 50, 60, 80 miles in, when those same enthusiasts are bonking, cramping, seeking a fifth diaper change, or otherwise looking for a shortcut home.

The trick is pacing. Isn’t it always? Yet other things come into play, too. The more comfortable you are in the dirt sections, the more energy you can save for the road. If you are fighting your bike in the sand for extended periods of time, you are burning matches you will need later, matches without which the cigar will never ever get lit.

Eating and drinking are such a key factor, yet people still forget to eat or drink. This is a common phenomenon in racing and affects pros as well a beginners. By the time you’re hungry, you’re being eaten.

Worse, riders lose water bottles in the dirt and then they need to somehow find liquid along the way or make it on their hands and knees to the next anti-death aid station. Having properly functioning cages is something half the people don’t have. Also, people don’t eat or drink in the dirt sections, because… they can’t. Once through the initial couple of dirt sections, riders are now at Mile 26 and haven’t consumer much of anything, and are faced immediately with a 5-mile climb which has some really steep pitches. You put off drinking and then the dehydration leads to dessication and DNF. Waiting too long to eat or drink will have devastating impacts later on, so do both at regular intervals.

Riders also need to be prepared for flats and be ready to fix them on their own despite the event having roving mechanics on the dirt sections and many on-course support vehicles. As many as half the riders will flat, and as many as half will be flummoxed by the physics of tire removal. Another half will not have enough tubes. The final 50% will run out of CO2 cartridges, and the last half will take this as an omen from Dog that they should sag their way back to the start/finish for fresh beer and treats.

Proper gearing is different for everyone, but the BWR is not the time to slap on the 11-23 and “man up.” Many riders fail to have as big a rear cog as they are going to need, and it often means one that you could bake a pizza on. The problem is that when fresh it’s easier to muscle a bigger gear up a steep climb, but once fatigued, injured, starving, dehydrated, bonked, cramping, and delirious, we need more gearing or a motor to negotiate the 20% plus inclines. At the very end, Double Peak hits 23% at its steepest, offering the thrill of victory as you spin up it, or, as in 2017, the ignominy of having to dismount and walk their bikes up a road climb.

One other issue people aren’t prepared for is the fatigue of riding the dirt and braking a lot. Their arms and hands get tired, which can lead to further overall fatigue, or worse, they crash. When you’re considering equipment, if disc brakes are an option, go with them. They will greatly reduce brake fatigue on your hands and allow a much more precise application of braking. This results in less energy wasted getting back up to speed as well.

Lastly, those who are prepared to go it alone mentally and physically are the ones who will have the most rewarding ride, even if that simply means surviving. Being prepared for the last half of the ride going into a headwind is as much mental as it is physical, because you do so much strenuous climbing and dirt riding on the way out and then start descending back to Bandy Canyon, but it’s all into a headwind. Once at Sandy Bandy and every section thereafter until Double Peak is more or less into a headwind. Riders should seek to work with other riders for much of this and not be tempted to leave others behind or get left behind, because riding in a group can save enough matches to get you from the Oasis up the long final ascent to Double Peak.

It’s back, and it’s darker and longer than ever for Wafflers. This year it has a unique challenge, the Canyon King of the Canyon Challenge, sponsored by Canyon Bikes. This consists of two sectors’ worth of suffering and it’s basically the entire length of Black Canyon on the way out, which goes up, down, and then a long up. On the way back, once riders get to the bottom of the Sutherland Damberg descent, there is another segment that goes back up and then down the opposite way riders did it earlier in the day on Black Canyon. If a rider doesn’t do well here with pacing, they may not have what it takes to hit the second sector with the same bravado they hit the Canyon on the way out.

Black Canyon comes just after the second feed zone and a lovely respite along a freshly paved road. It is here riders will be confronted with The Zwartenberg—a decidedly dirty 3-mile ascent over washboards, sand and gravel, only made worse by the 2-mile descent after, which requires going down slower than you went going up. To make matters even worse (read: BETTER), at the bottom begins the longest, most big, black and beautiful climb of the day, eleven kilometers of the purest dirt. This climb will take many more than an hour to ascend. Good thing it’s a remarkably pristine place to feel completely alone. Sadly, riders will barely notice anything more than the few feet in front of them.

At the top, riders still have another happy 73 miles to go and the headwind will only get stronger after they reach the summit of this dark and demented segment. This lonely course feature adds the lovely touch of more dirt to the BWR in an emphatic and definitive drop of the guillotine’s blade, helping to make this year’s route dirtier than any before it.

This sector was introduced in 2017, with permission of SDRPT Park Ranger Dave Hekel, and it is one of the most interesting sectors of them all. It barely has any inclines but it has all sorts of rocks and challenges such that every body has to get off and run at some point.

It’s varied terrain runs parallel to Lake Hodges and follows along the western border until it becomes Twistenlemonberg, not to be confused with Lemontwistenberg, which some riders completed on the way out.

Hodgendam starts out after a pleasant but short asphalt section that riders enjoy after the rocky mayhem of Hodgesmeergate. Once on the Hodgendam, it’s easy to see why this is the most unique sector of the event. There are little bridges, banked turns, whoops and jumps. There are a series of tricky little ravines that many will choose to walk through, while some will ride, or try to. Eventually, all must get off and navigate the rocks as though it were a cyclocross race. Many will have to dismount several times along here. It’s okay. Walking is fun!

Once through all of the rockstacles, riders will pass Hernandez Hideaway and get on what really is the only true gravel road of the event, a roughly, and we mean roughly, 3-kilometer sector of big, rocky gravel. You’ll need to find the right line through here and stay on it because the gravel along here is brutal. The beauty of this sector will be lost on you, but if you were to take it all in there is the pristine serenity of the lake to the left and a wonderful woodland-like hill on the right that shouts the existence of Del Dios Hwy. It’s serene but the sound of your wheels grinding through the gravel will dominate your senses, unless thirst is considered a sense, because it’ll be hot with a headwind here.

A signature sector with an augmentation for 2018, this deceivingly diabolical diversion, takes Wafflers and Wafers alike on an unseemly 6-kilometer excursion, eschewing the heavenly smooth and open road along Bandy Canyon. It parallels the beckoning smooth highway on a devilish dirt trail that is mostly, you guessed it, sand. Some would even say quicksand, and its depths will create more separation than the Bandy Weg climb that follows.

This sector is punctuated by a brief stint back on the road, but before that riders get to enjoy a soft single track with plenty of turns to slow everyone down. The initial part is kinda fun, really, if you like that kind of thing. There’s a headwind with the chance to slide out or hit a root and divert into a fence or a tree. Once through the first portion, the road feels weird on your tires, but not for long as the second, more challenging part begins. This section winds its way through a single path that’s usually home to horses.  Watch the land mines. It’s twisting and turning is only made worse by the unsuspecting deep sand pockets that can swallow riders whole if they take the wrong line. If you are a spectator, this is like hanging out at the final turn of the hometown crit, where all the crashes happen. Inevitably, riders will crash here, no matter how many times you warn them. When you do fall, make sure to wave your hand for one of the marshals to rescue you. Anyone caught trying to cut the course here will be left to the not-so-swift suffocation only quicksand can provide.

There is a third section on Sandy Bandy that ends with a difficult, rocky descent, before a turn up a nice kicker to the start of the Bandy Weg climb, but not until a forced dismount signals the next level of hell has been reached.

Aside from the above-mentioned challenges, the BWR is a piece of cake once you leave out the 100 or so more miles of brutal sand, dirt, rocks, wind, heat, and asphalt.

Get a good pair of bolt-ons. Bottle cages, I mean.

BWR awaits! What can you do in exchange for all this life-saving information and these inside tips? Hint: Get yourself a subscription to Cycling in the South Bay! Click here and select the “subscribe” link in the upper right-hand corner. Thank you! 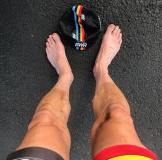 § 2 Responses to BWR technical tips: The devil’s in the dirty details

You are currently reading BWR technical tips: The devil’s in the dirty details at Cycling in the South Bay.