I was out flogging this morning with Josh Dorfman, Mike Hines, and Kristie Fox, and in between smashes we got to talking about cycling longevity. The question was along the lines of “How do people keep racing not just for years but for decades? How do you keep from burning out?”

I had to think fast because we only had a couple of minutes’ rest in between Flog intervals, but here’s what I came up with. Your results probably vary.

Different people obviously enjoy different things about riding bikes, and you can tell a lot about what they like by the rides they do. Here are my rides from last week:

I’m doing TTT practice again today and no matter how I look at those rides about the only thing they have in common is that they aren’t any fun. It’s obvious I don’t like fun, or spoken another way, not having any fun is a lot of fun.

The Flog ride that we do on Thursdays is the least fun of any ride I have ever done. It’s in its third year and I wish I had a quarter for every person who has done it once. This past Thursday I felt awful, as I hadn’t recovered from Telo. The reason the Flog ride is so bad is that it is six hilly 5-6 minute intervals, which is not fun, but since you do it with a group, each lap is a mini-race.

Because we’re bike racers we keep score in our heads each lap, which is silly. We regroup in the parking lot after each interval, descend a twisty road to the start, and do it all over again. Everybody keeps score and strategizes how to win the interval, or at least how to delay the droppage as long as possible. Like I said, silly.

The fastest lap times ever recorded were when Daniel Holloway and two of his teammates came out and did it. I love it when people say “Holloway’s just a sprinter.” So ignorant. That guy, in addition to being clean as a whistle, is good at virtually every aspect of bike racing. Stathis the Wily Greek did the Flog ride religiously before he retired at the unripe age of 30-something. He won every lap almost every time, including the horrible 13-14% grade up La Cuesta, the climb we do the last lap on and where we take a glory group photo at the end.

Some people found it demoralizing to get smashed every single lap by Stathis, but I didn’t. I love that kind of riding because it is so real. You don’t dangle in between delusion and reality, you get reality force-fed down your throat. Stathis was so much better than you even on his worst day and your best day. Like the Alabama rednecks used to say about Bear Bryant, “He can take his’n and beat your’n, or take your’n and beat his’n.”

Anyway, I felt awful from the start. Greg Seyranian’s fitness is really coming around; he blitzed us on Lap 1. Then he started hard at the bottom of Lap 2 and led out the whole lap, and then dropped us at the end. Then on Lap Three he led out the lap and I sat on and managed to pass him at the top. Lap Four he led it out again, and Josh Dorfman uncorked a nasty attack that no one could follow. Lap Five Mike Hines attacked us all on the mini-wall past the stop sign. I hung on somehow. Mike is a masters world champion on the track. He has these accelerations that just break you.

On Lap Six I quit and went home, which I hardly ever do. I had a deposition later that morning, but that’s just an excuse. The reality is I apparently had had a little bit too much fun. 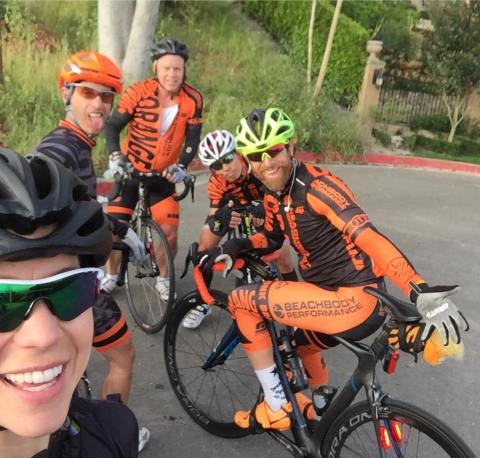 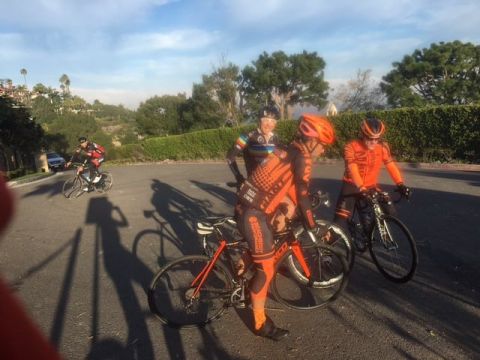 You can see how steep the finish on La Cuesta is, plus Kevin Nix staring at his front wheel, Denis Faye looking dazed. Only Casey is smiling but he’s always smiling.

You are currently browsing entries tagged with josh dorfman at Cycling in the South Bay.